5 (or more) Grain Bread with Walnuts 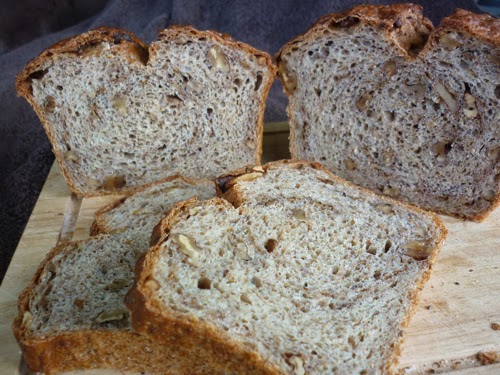 When Carola from Sweet and That's it announced our "Back to the Future, Buddies" baking project for March I was very eager to bake along. Anything with walnuts, cheese or wine gets me excited!
I used walnuts from my mum's garden, they taste so much better than shop bought ones.

The end result is a very tasty loaf, perfectly suited to go with any cheese. Or salad or soup. Or jam, or ... It makes fantastic toast too, thinly sliced, just butter will do. 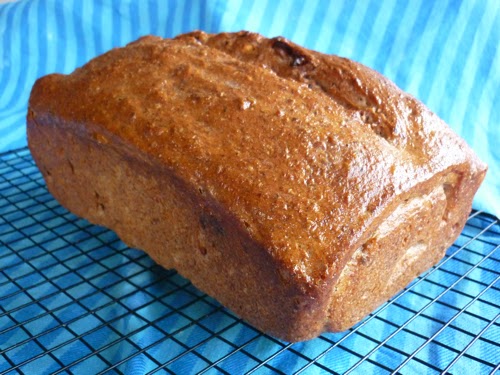 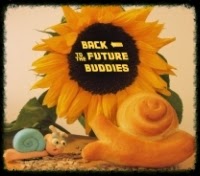 This dough can be made by hand or machine. I used the dough programme of my bread maker (which takes 2.20 hrs. including first rise). Put all ingredients -but the walnuts- in the pan of your bread maker in the order as described above. Let the machine do the work.
When mixing by hand or mixer, knead for 8 - 10 mins., cover and let rise for about 60 mins. at room temperature.
In the meantime spread the walnuts onto a baking sheet and toast for 10 mins. at 180C (fan). Let cool completely. Lightly butter or oil your bread tin.
Flatten the risen dough on a lightly floured work top, approximately to the width of your bread tin. Spread the walnuts over the dough and roll the dough tightly. Place it in the prepared bread tin, seam side down. Put the tin in a large plastic bag, close and let rise for another 60 - 75 mins. The dough should be doubled.
Preheat the oven to 190C (fan). Bake the loaf for 35 mins. Release it from the tin and put it back into the oven directly on a baking sheet. Bake for another 10 mins. The bread is ready at an internal temperature of 93C (for those amongst us with fancy kitchen gadgets ...) or when it looks right and feels less heavy. If you like, brush the hot loaf with melted butter for a nice shine. Let cool on a wire rack.

Claire
Exchanged busy city life in the Netherlands for a Scottish loch side kitchen with the best view ever! And so much more time on my hands ....